After leaving Colorado, we headed up through Wyoming and into southwestern South Dakota.

When we got into the Black Hills region of South Dakota, we went straight to the Crazyhorse monument. They charged an entrance fee to get in, but thanks to Grant's Air Force sticker on the windshield, they waived the fee, since he is active duty! We didn't get any closer than the picture shows to the monument, but we went in the museum. They allowed Watley in, which we appreciated, since we found out ahead of time that pets are not allowed at Mt. Rushmore. 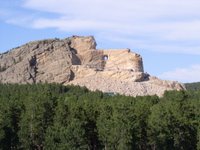 We were in this region of South Dakota during Sturgis Bike Week (the 2nd biggest motorcycle gathering in the country) - which doesn't take place exclusively in Sturgis, South Dakota, but the entire southwestern section of the state. This is just a sampling of the thousands of motorcycles we saw during our 2 night stay in the area. 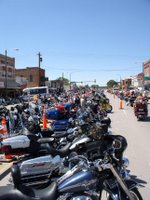 I got a kick out of all the big, burly, biker dudes sipping on their Starbucks Frappucino's and Latte's. 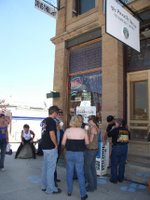 I'm glad that our stay in the area overlapped with Sturgis, because it only made our stay more memorable. Although, we were pretty sick of motorcycles by the time we left!

Here is the ever-popular Mt. Rushmore. Grant was attempting to make it look like I was one of the people on the monument. 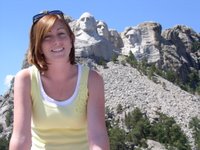 Backing up a little bit, while we were driving through Wyoming, I saw a sign for a town that said "Population: 1." I asked Grant over the walkie-talkie if he saw the sign. He said not only did he not see it, but he didn't believe me. I convinced him to turn around, and when he saw that I was right, we decided to take a picture of the sign, for fear that no one else would believe us. 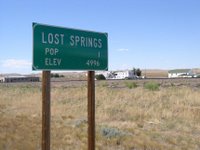