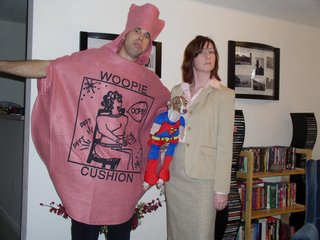 Well, another Halloween has come and gone, and I have to say, we truly love handing out candy to all the trick-or-treaters, and seeing all their cute costumes. There were definitely alot more kids this year, since we're living in the Air Force neighborhood, where there's at least 1 kid to almost every house.

And Grant truly loves dressing up. Last year, he was a Slim Jim, this year, he was (fittingly) a Woopie Cushion. I bought this costume for him last year right after Halloween. I didn't realize how excited he was to wear it - when I proposed having a small Halloween party (which we ended up not having), where everyone would have to dress as a couple, he told me that I would have to find something to go along with a Woopie Cushion, because that's what he'd be wearing. 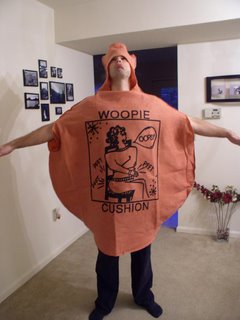 And Watley really loves dressing up, too. Okay, not really. He hated wearing his Superman costume. And it didn't really fit him (he was too skinny for it!), so he kept coming out of it. And I was supposed to be Lois Lane, but I don't really think I pulled it off. After taking the picture, I ended up changing because the skirt was so uncomfortable. 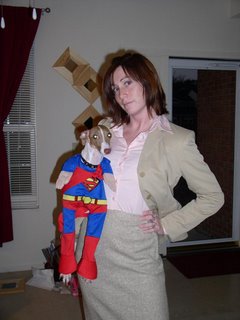 And once again, Grant shows his skills at pumpkin carving - carving 2 pumpkins this year! One is a spooky mansion, and the other I think speaks for itself. 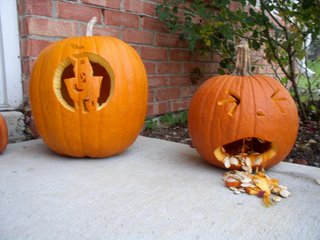